Hi-Point has a reputation for making firearms their own way. Their pistols and carbines lack the bells and whistles of other firearms in the market but they are inexpensive, work no matter what, and come with one of the best customer service policies in the industry. Well, Hi-Point has taken their flagship Hi-Point carbine and chambered it in 10mm. The Hi-Point 1095TS is not just another new caliber for their carbine *, but a sign of new things to come. As you can see, HiPoint sent us the 1095TS Edge which is hydro-dipped in Real Tree Edge camouflage.

*This article was originally published in April of 2018. 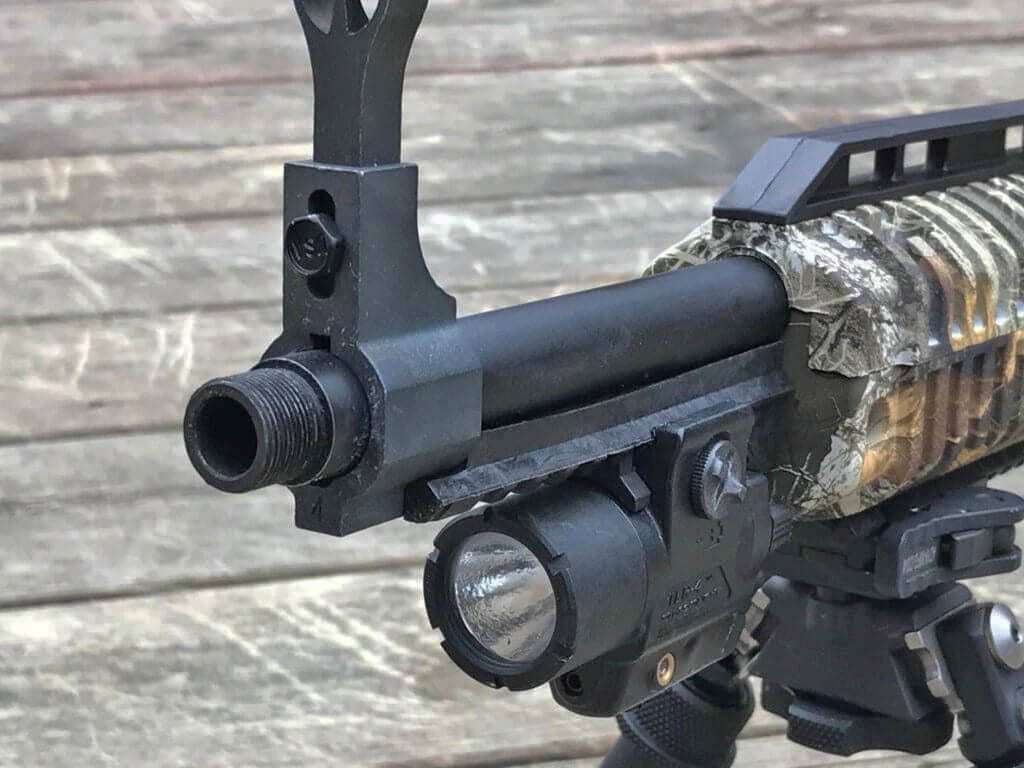 I believe they are joining the rest of the industry and embracing suppressors. The 1095TS has a thread pitch of .578×24. This is a little odd as that is the thread pitch used for .45acp barrels. Typically 10mm barrels share the same thread pitch as .40 S&W barrels, which is 9/16 x 24. This is not a serious issue and is actually beneficial for me since I have a SilencerCo Osprey45 suppressor with a piston threaded in .578×24. I don’t have a piston in 9/16 x 24.

Edit: According to Dave Kiwacka they went with .578×24 because they think most people have .45 cans than dedicated .40s&w cans.

I did not shoot fast but I did not notice any gas blowback at all. This is typical in many direct blowback guns. I spoke with Dave Kiwacka of MKS Supply, which represents Hi-Point Firearms, and he said threaded barrels will become standard across their other carbines.

The 1095TS stock shares the same features as their other carbines. The bottom rail below the barrel is perfect for mounting lights as it minimizes barrel shadow. Obviously, when you add a suppressor, the can will cast a shadow in the beam pattern of your light. I opted for my TLR-4 since it is small, has decent light output and has an integrated red laser.

A minor issue with the Hi-Point carbine rails is the fact that they are weaver spec and not Picatinny spec. This limited what accessories I was able to fit on the 1095TS. The spaces in the rail are a little too narrow for some of the mounts I use, however, you can modify the rails with a file to open the slots up. You can see the fourth slot from the right is rough looking. I widened it to accommodate the American Defense MFG mount on my B&T Industries Atlas bipod. 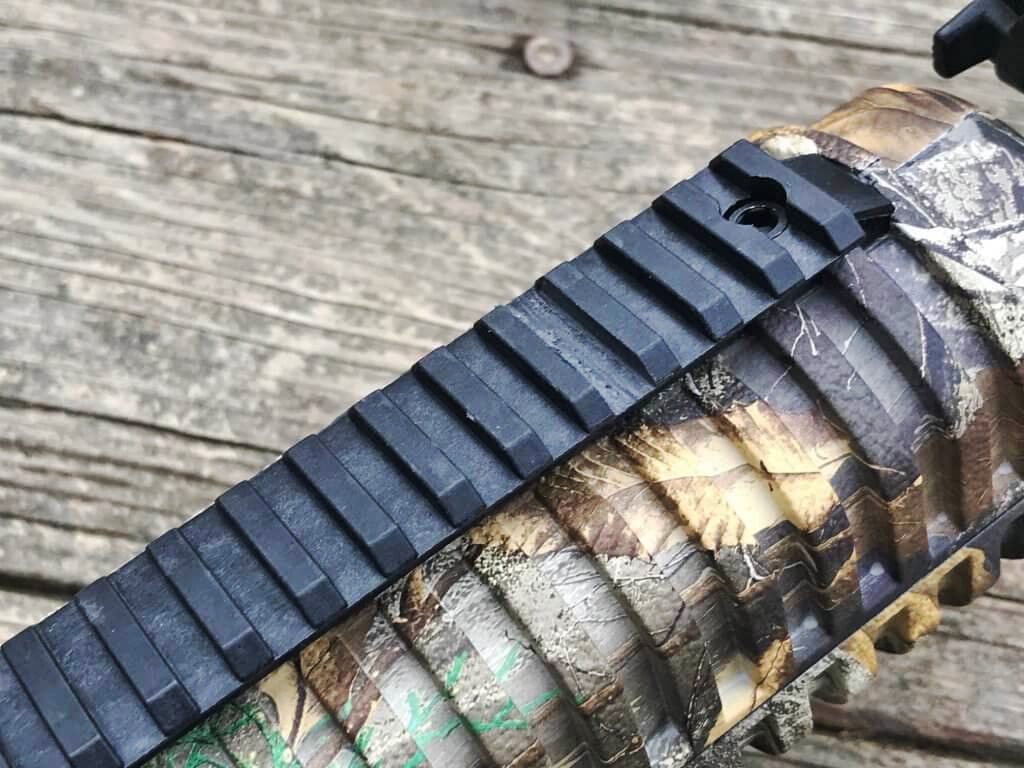 The rear sight is simply bolted to the top of the polymer rail. I removed it but there are a couple raised sections on the rail which will interfere with some optic mounts. You can see the raised bump in the picture below just behind the HiLux optic. These bumps are what the rear sight interfaces with.

Below the rails, you will see the side charging handle of the 1095TS. It has a plastic knurled cover for the bolt. Sadly, the bolt is not ambidextrous.

Toward the rear the stock, the 1095TS has a raised rubber cheek rest. When I took the rifle out of the box, this cheek rest was rather sticky. Not with a residue or anything but just sticky. After using it for a little bit, the stickiness has diminished. 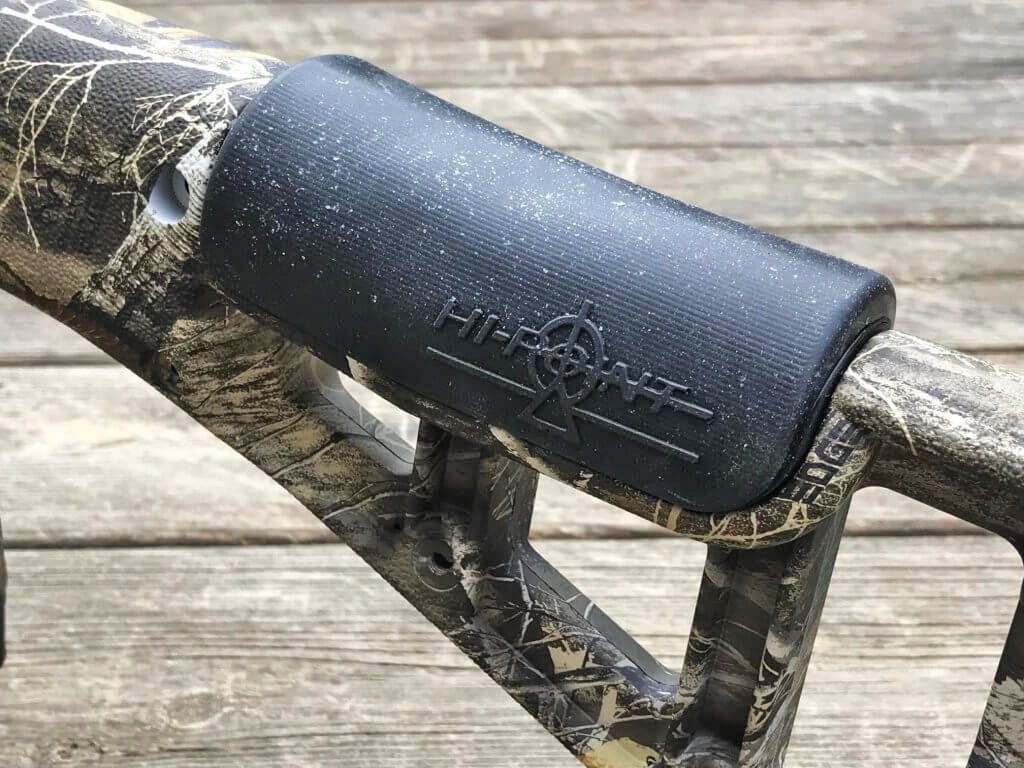 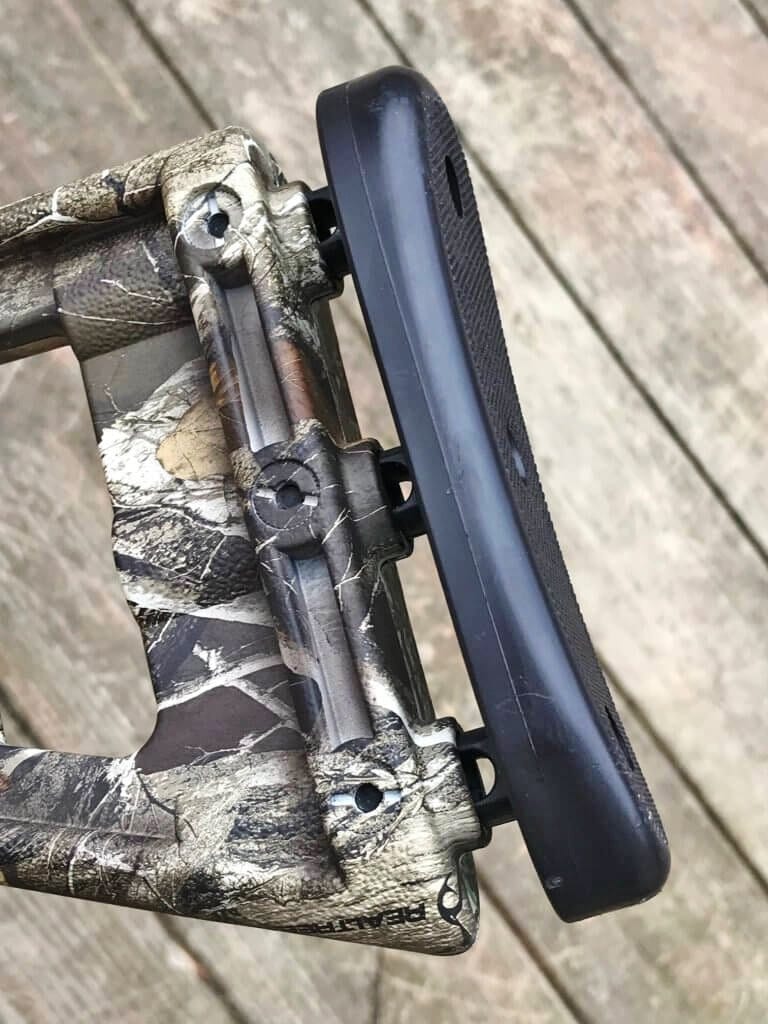 I set up the 1095TS Edge with a bipod, laser, red dot, and suppressor. These accessories were a personal choice and they all serve a function. The bipod is from B&T Industries and has a wide range of motion which allows me to get low on the stock of the rifle. 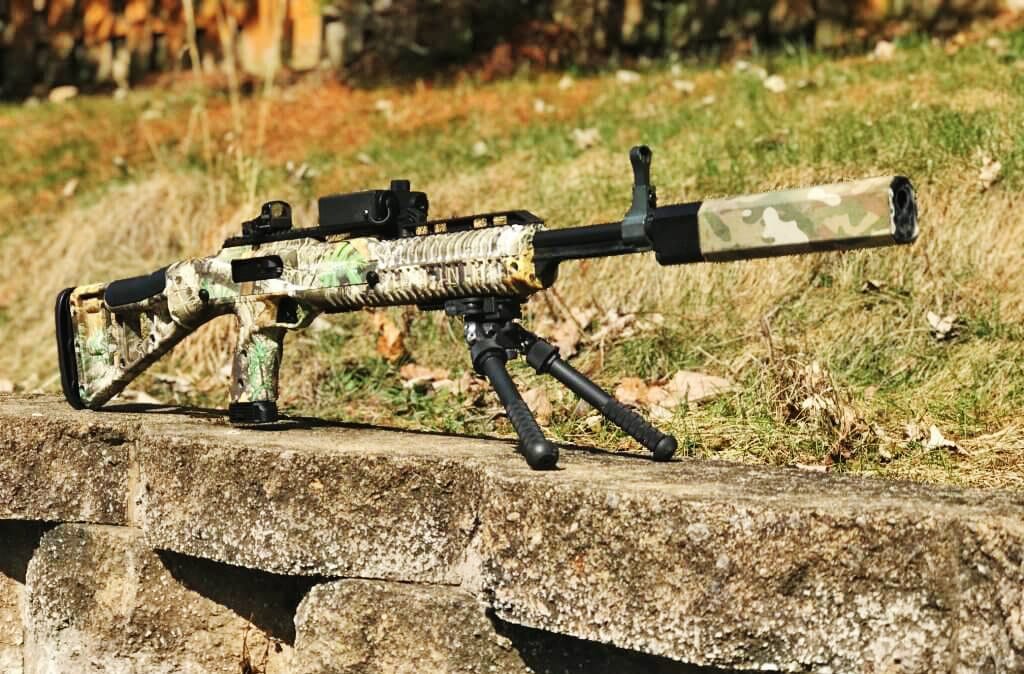 One characteristic I noticed when shooting the 1095TS was how sharp the recoil was. The rearward travel of the gun under recoil is not that bad but it is the cheek slap I felt with every shot. I removed the sticky rubber cheek rest before I shot the 1095TS. I do not recommend doing that. I reinstalled the cheek rest hoping it would help with the cheek slap, it did not. While the cheek slap is not overly painful, it is certainly unpleasant. 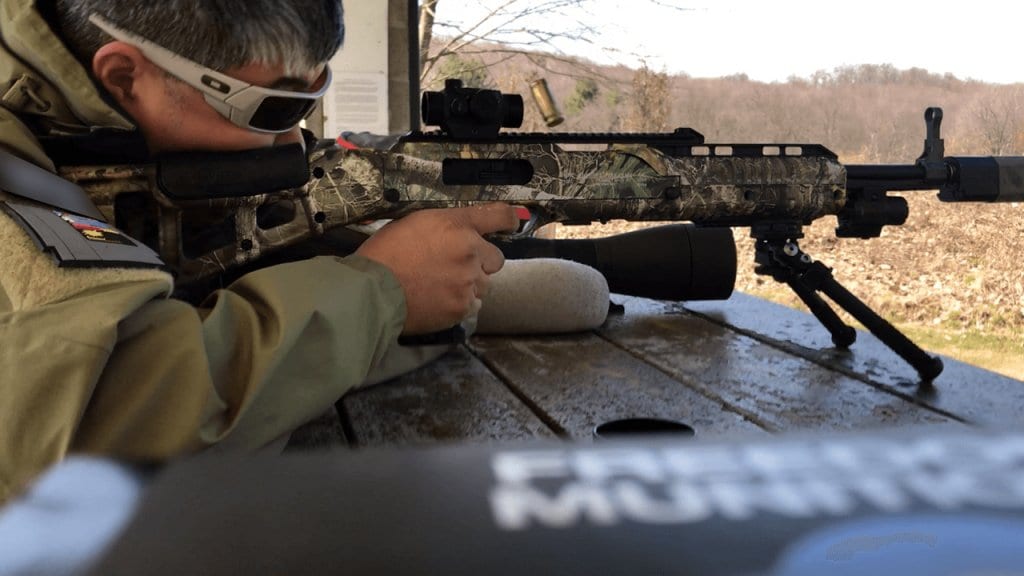 I was shooting 10mm ammo by Freedom Munitions. The group size of the 1095TS was not great. But still not the worst I have seen. See the photo below. That is a 10 shot group at just 15 yards. I clearly had a flyer or I jerked the trigger.  The 1095TS is not a precision weapon but it should work just fine for close-range home defense — or, you know, outdoors. Where there could be bears. 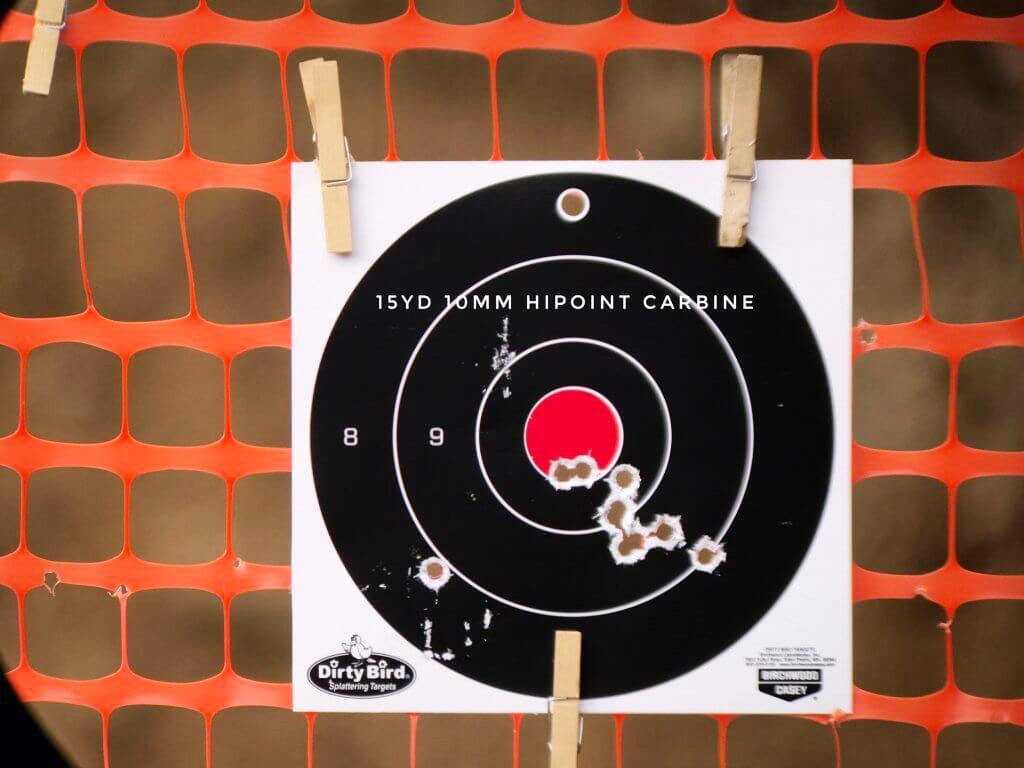 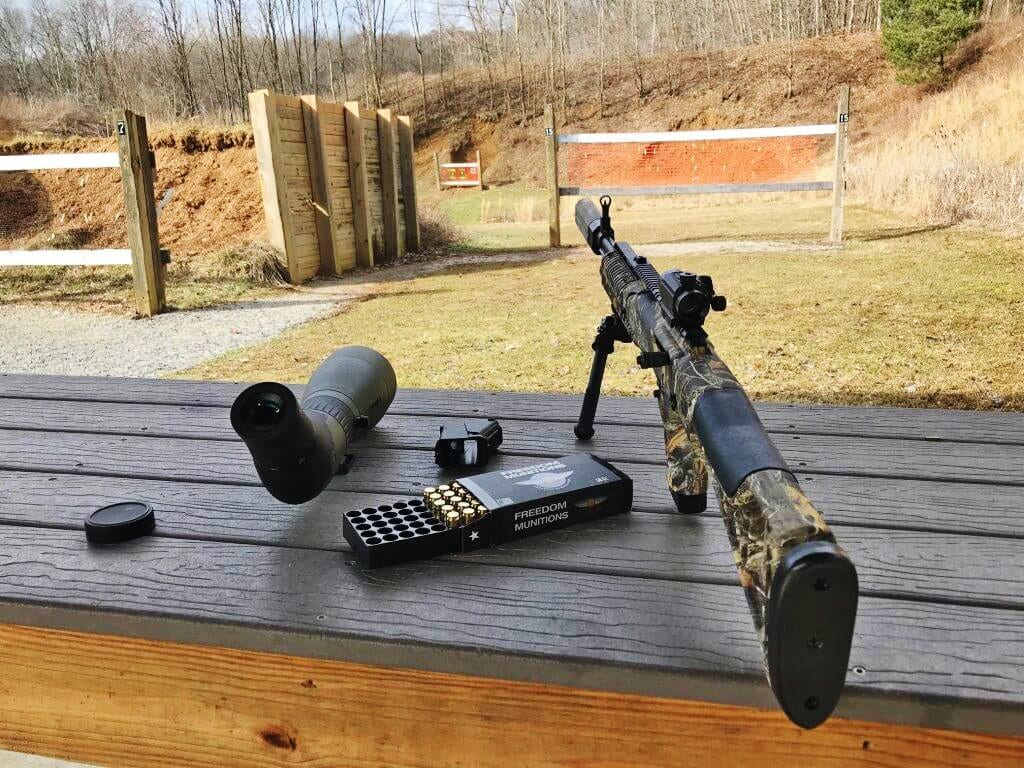 The 1095TS has a single stack 10 rd magazine. One temporary issue is the lack of magazines. The 1095TS only shipped with a single magazine. According to Dave at MKS, even he has trouble getting extra mags for demos. More mags will be coming soon. Right now GunMag Warehouse has a selection of Hi-Point magazines for your needs. But they do not have 10mm magazines at the moment. I am sure they will get a shipment in the future. I hope that Redball or ProMag comes out with higher capacity magazines for the 1095TS. 10 rounds go by quickly. 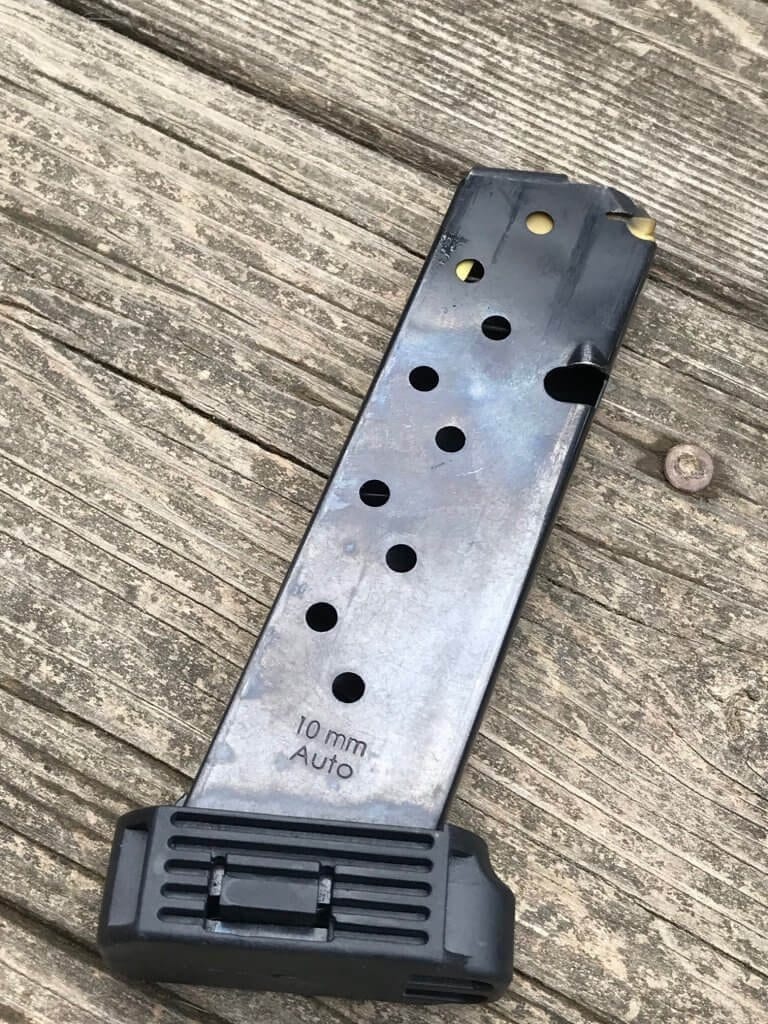 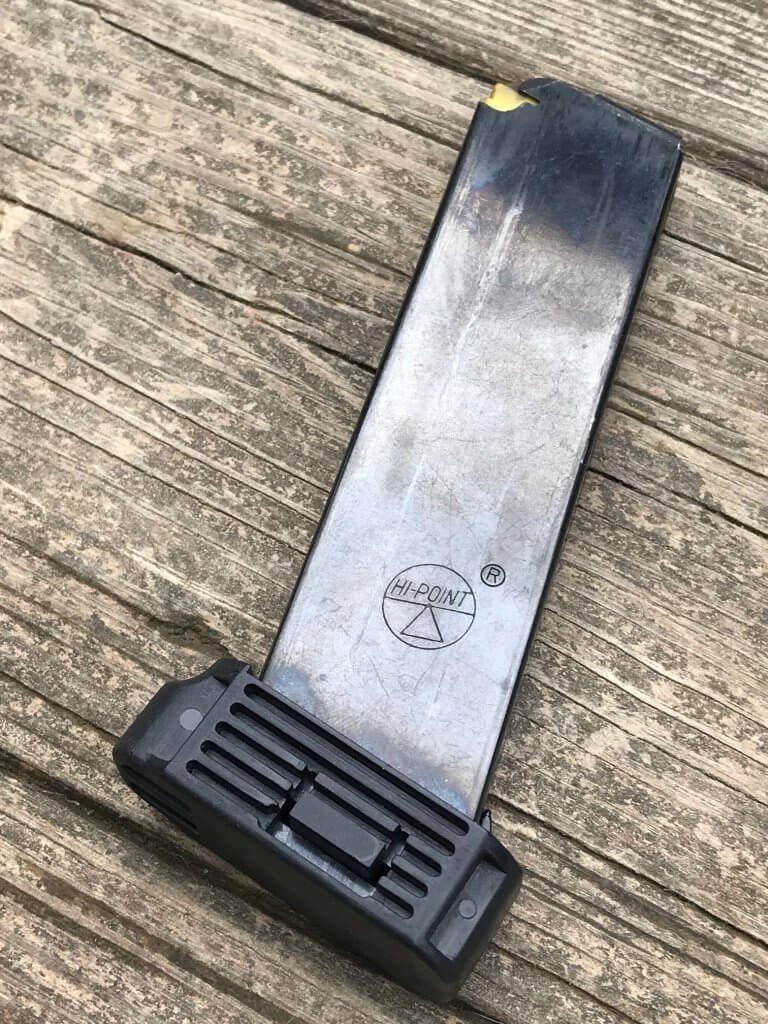 The 1095TS is a great budget rifle chambered in a bear stopping 10mm. The 1095TS Edge retails for $439 MSRP or you can get the regular black polymer version for $389.99. Other 10mm rifles and even pistols cost more than this. In some cases more than double the price.

Even though the cheek slap is unpleasant it is not a deal-breaker. I will try to make a better cheek rest material to help soften the recoil impulse through the stock. I am looking forward to High Tower Armory’s bullpup chassis. I hope the 1095TS will fit inside and perhaps the different geometry of the stock will alleviate the cheek slap. I would prefer to have Picatinny spec rails on the 1095TS but it is not that difficult to modify them to make them work.